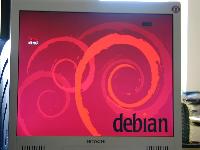 Some time ago, i came across this nice LILO splashscreen for Debian. Now i decided to share it with everyone.

So, here it comes:

AFAIR, these versions only differ in a color of the text of available boot options („b“ makes it black, and „w“ – white).

Let this be a small HOWTO for those Debian users who want to beautify their LILO splash. It may, or may not, apply to other distros.

WARNING! You, and only you are responsible for any consequences of following these steps. This instruction should not harm your computer, however, i would recommend to have an emergency boot floppy or a bootable CD to boot the machine from, in case problems occur.

Let’s say you have Debian sarge or sid. This HOWTO may or may not also apply to woody installations. If you try it with woody, and it works, drop me a line (don’t forget to tell what the version number of your lilo deb-package is). Let’s get back to the instruction now. Do you get a red table with available LILO options on boot? If you do, and you would prefer to see a nice graphic instead, read on.

BTW: the „lilo“ deb-package automatically installs a few pictures that you can use for your LILO splash screen. However, you can always get better ones. Most of them should contain instructions on how to install them and what to add to lilo.conf.

P.S. This HOWTO has a Lithuanian version here.